The Abuse of Power to Hide Leadership Incompetence 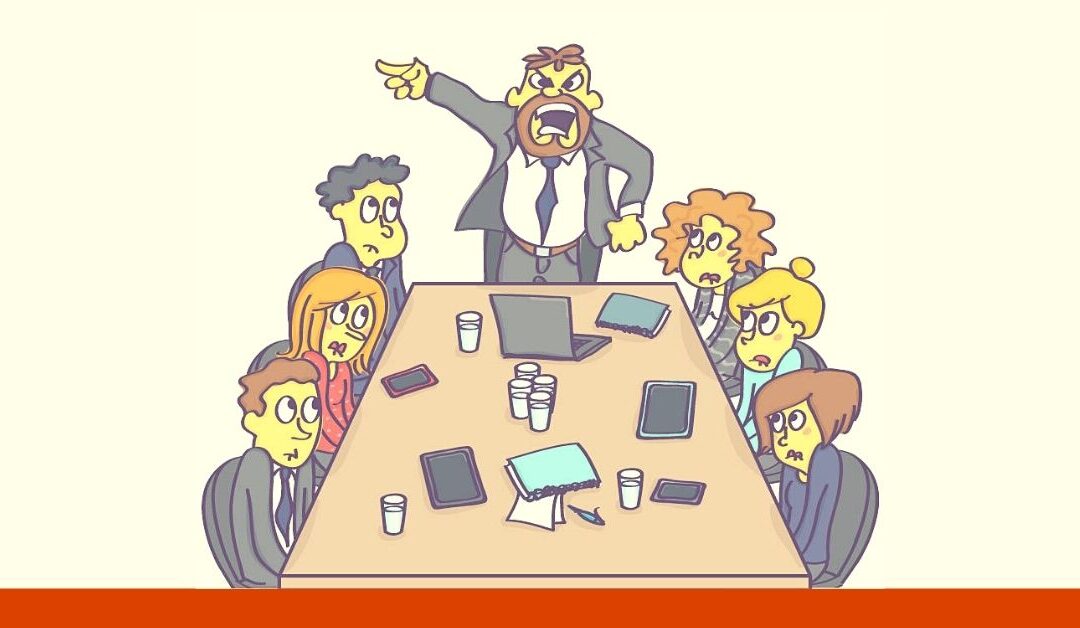 Exploring the dysfunctional autocratic behavior of leaders who misuse power to compensate for inexperience and incompetence.

Does your boss yell at you? Are you punished when you take initiative because you didn’t check in with him or her first? Have you learned it’s better to be quiet than upset your boss? If so, you are not alone. Many leaders still abuse the power and authority of their role because it’s the only tool they have in their toolkit.

The role of the leader in an organization comes with much position power and because many leaders don’t know how to lead through the use of leadership skills, personal power, or influence, they shift to autocratic behaviors and seek instead to overpower and control to get things done. The abuse or misuse of power is a direct result of inexperience, subjectivity, and incompetence and can lead to a myriad of dysfunctions in organizations, on teams, with peers, employees, and even the way the business functions. In other words, a leader’s abuse of power can negatively impact employee performance, engagement, morale, productivity, and the bottom line.

Unfortunately, one of the things most complained about by employees and least discussed by those who might do something about it is the misuse of power by leaders and managers. They either misuse power to stay in control, becoming autocratic, emotionally driven, and bullying. Leaders who misuse their power don’t add value to the employee experience, the organization, nor do they develop as human beings. Often when a senior leader misuses power and becomes autocratic, the next level of leaders acts out of powerlessness and become permissive. A culture of fear is developed, where innovation and productivity declines. The organization suffers because everyone is stuck trying to placate the Autocratic Leader at the expense of their own talents, abilities, and competence.

While there are many stories in the news of how leaders abuse power criminally, these are not the people we are speaking of here. This article is about those leaders who are trying to cover up their inability to influence the behavior and performance of employees in any other way than becoming autocratic and authoritarian. As the saying goes, “If the only tool you have is a hammer, you will treat every issue as though it were a nail.” And many leaders fall into this category. In fact, results of a recent survey in the US revealed 37 percent of the country’s workforce, which is roughly 54 million people, have managers who scream at them, belittle them, sabotage their work, and are otherwise aggressive.

There is no doubt that incompetence plus power leads to the use of aggression to get things done and to inflate one’s sense of superiority. Threatened leaders will turn things around and threaten their employees as a way of discharging their fears and other feelings. Autocratic Leaders want to keep power to themselves and tend to lead by restricting the freedom and responsibilities of those who are below them in the hierarchy. They affirm their superiority by making sure everything flows through them.

Here are a few of the ways the Autocratic Leader abuses power and how employees respond:

Holding on to Power

Holding on to power by micromanaging, not asking for inputs from others, solo decision making on the distribution of responsibilities, and promotion of employees are the main ways that leaders abuse power. When leaders believe the power to succeed resides with them, they drive employees by issuing threats punishments and evoking fear when they don’t live up to their expectations. Because they feel entitled to use the power of anger and aggression to keep employees on course and in line, they don’t hold back when employees don’t act the way they should, according to the Autocratic Leader.

Leaders who abuse power and don’t delegate authority and decision-making throughout the ranks, create a bottleneck where everything has to flow through them. To maintain power, they quash independence and innovation by becoming upset when someone makes a decision to act without running it by them. A former client, a CEO of a growing pharmaceutical company, was incensed by her new VP of Sales who sent a letter to the company’s main customers without first seeking her approval. She was ready to fire him because he assumed he had the power to act independently. It took her many months of coaching to see that independent decision-making and trust in her decision to bring this highly accomplished executive on board was in the best interest of her and the company.

As power and control reside at the top of the organization and little is distributed to employees down the ranks, the achievement of employee potential is stalled. While care may be given to hiring the best people into the organization, consideration is not given to the distribution of authority. As long as employees do what they are hired to do, little more is expected of them, regardless of how much they have to offer and their potential value to the business. Talented employees soon leave, resulting in a mediocre workforce and high turnover. Unfortunately, this also means the organization will never grow beyond the limitations of this leader. Employees and teams without decision-making authority are no more than glorified research and administrative assistants that are limited by the power bottleneck their leader creates.

Ignoring the People Side of Leadership

When the only tool of a leader is power over employees, they have a tendency to ignore the impact of their aggressive behavior has on others and not consider the needs of others. They dehumanize their employees and will often convince themselves that employees deserve to be treated with disregard because they don’t measure up to expectations. They feel empowered when they are being productive and believe it’s the hallmark of a great leader and employee. They judge employees as lazy, stupid or hopeless when they aren’t as productive as they are, increasing feelings of superiority and power.

When Autocratic Leaders abuse their power, employees stop caring and investing themselves in anything more than what they need to in order to survive. They either complain as they know they are powerless to do anything about their leader’s behavior or they leave. Innovation, engagement, motivation and retention are all negatively impacted by their behavior. Because employees fear Autocratic Leaders, the work environment is highly stressful and tense. Employees become demotivated and on guard, fearing they will do something wrong. Autocratic Leaders do not see they are the cause of the lack of motivation. They assume that employee motivation comes from creating a structured set of rewards and punishments and hand them out freely. Acting in this fashion leads to further employee stress. The workplace becomes rigid and excessively demanding, creating high absenteeism, hostility and lowered productivity.

One of the hallmarks of the inexperienced or incompetent leader is their reactivity and subjectivity. While they can rationalize their behavior (because the employee or situation made me do it) they have poor self-management, impulse control or ability to tolerate frustration. They tend to make decisions based on a subjective criterion and employees are left feeling insecure and frightened of doing something wrong. Their behavior is driven by emotions, and as a result, employees become more concerned with their survival than doing their best work and achieving their potential.

Out of a fear of losing their jobs, employees resort to trying to gain favor with the leader by agreeing with everything they say. Other employees adopt the emotionally driven behaviors of their boss making fear, adaptation, and self-preservation the norm. Competition and a lack of communication, cooperation, and community are norms for the culture. Employees are concerned with their survival and not with overall goals.

Studies show that punishment causes employees to fight back in some way, to seek retribution often through passive aggressive behaviors. While the intention of the Autocratic Leader may be to stop undesirable behavior by punishing the employee, it doesn’t mean they will. Reinforcing the required performance or behavior has been found to be much more effective. When leaders get caught up in emotional reactions to unwanted behaviors or substandard performance, their go to tool is punishment. This abuse of power compensates for a lack of performance management skills.

Unlike corrective feedback, punishment is not meant to get to the root of the issue and support successful performance. Emotionally driven, punitive behavior instead demotivates and evokes fear in employees. While the Autocratic Leader may think they are demonstrating strength by using punitive strategies, they actually have the opposite effect and cause harm to their reputations. Employees fear them and lose respect for the leader. Additionally, employees don’t tolerate it and in the long run, it will lead to low retention.

Autocratic leadership and the abuse of power is caused by the failure of leaders to develop, which causes them to resort to the overuse of power and control to lead. The abuse and overuse of power can only stop when a leader recognizes the limitations of their style and the negative impact it is having on themselves and others. The first step in leadership mastery and real potency starts with the leader getting to know themselves and knowing others rather than learning leadership theory. Self-Awareness (Knowing Yourself) and Other Awareness (Knowing Your People) are the first two pillars of developing as a leader. They are the foundation on which all other behavioral and skill development is based.

While becoming competent as a leader requires that you have certain knowledge, skills, attitudes, behaviors, and experience, without being conscious of yourself as a leader and aware of the people you are leading, you will create what is commonly referred to as the “Knowing-Doing Gap.” You might know you should be leading differently and even know what you should do, but you keep holding on to power and abusing it to stay in control because you feel less vulnerable when doing so.

As a leader, you must be willing to step outside the safety of your comfort zone and take responsibility for the impact of your abusive behavior on others. Becoming aware of unconscious patterns and emotions that drive behavior will open the door to an expanded perspective and new possibilities. Having true power and authority require you to go within, to do the inner work that allows you to show up as your most powerful, authentic self — which will, in turn, inspire others to do the same. The fear-based pattern that causes autocratic leadership behavior (control, dominance, yelling, devaluing or dismissing others, self-promotion) are ways you’ve learned to “play it safe” at the expense of your own growth and the growth of your people and organization.

For more information about how you can develop as a leader through individual coaching or participating in a leadership coaching program, contact us at adranitsaris@caliberleadership.com.