Is Your Leadership Creating Silos? 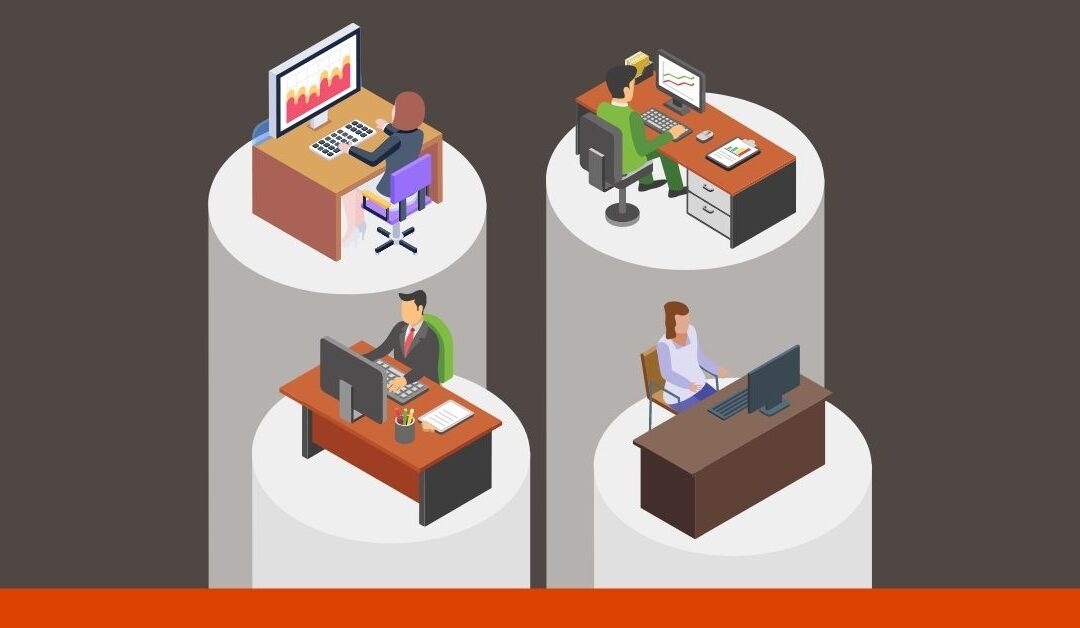 There is a type of organizational narcissism that exists because functional leaders are allowed to focus solely on themselves and their own agenda. They create silos and treat them as their domain to rule over, where employees work in the service of their leader and not the organization. In fact, these leaders don’t consider the interrelationships between their departments and others because of their narcissistic self-interest. A recent survey from MyCustomer.com shows that 40 percent of company employees report that they aren’t adequately supported by their colleagues because “different departments have their agendas.” Rather than having shared accountability, leaders and employees alike shout the battle cry of the silo, “It’s not my job, it’s not my problem.” And rather than building high functioning teams that intersect collaboratively with others to achieve a shared goal, leaders dig moats around their castles and settle into their comfort zone where nothing is their problem or responsibility. Meeting their need to be in control, these leaders experience their power only when they are the king or queen of their own castle contributing to the organizational dysfunction of silos.

Organizational silos occur when leaders and their teams or departments focus on achieving their own results and agenda. Siloed teams often end up working in isolation from the rest of the company, leading to both internal and external problems for employees, leaders, and productivity. So focused are people on their own work, they don’t think of the impact of work product, timelines, or goals set according to one’s own priorities on other departments. It’s like having collective tunnel vision with whatever they are doing the most important work needed to be done.

Once a business becomes large enough to have managers and functional areas, you have the structure for silos to exist. Any hierarchy has the potential to have silos and is not necessarily a bad thing in and of itself. It’s when you add a silo mindset of the leader or employees to the mix that you run the risk of creating the dysfunction of silos where everyone works in isolation and protects their turf. Leaders have the power to create silos and senior leaders have the power to make sure that the dysfunction of silos doesn’t exist in their organization by managing leadership behaviour at all levels.

A silo or a function that acts autonomously is characterized by the absence of sharing information, goals, timelines, challenges or processes with other groups. The leader believes that they are entitled to lead their group the way they see fit, as though they are competing with the other functional areas. As a result, a leader who fosters this collective mindset with their functional team creates issues and dysfunction across the entire organization. Like a cancer, the department lives to feed itself, without regard for the host company.

We frequently hear clients talking about silos as though they have somehow emerged organically. They take no responsibility for this dynamic occurring on their team as a result of their leadership behaviour. Silos start from a mindset that believes holding on to information is power and a reluctance to share information with employees of different functions in the same company. This attitude starts from leaders either having the mindset themselves or when they allow their direct reports to hoard information, reducing the organization’s efficiency and, at worst, contributing to a dysfunctional culture.

Silos are created through a lack of alignment of leaders to organizational goals. Instead of working toward the collective goals, leaders with an “I know better” mindset put their agenda first. If they don’t agree, they just don’t go along. This leads employees to emulate the mindset and behaviour of their leader and not collaborate with other departments for fear of upsetting their boss. When senior leaders tolerate this behaviour and don’t hold departmental leaders to account, the result is the dysfunction of silos including low productivity, morale, engagement and complaining ultimately adversely affecting the organization’s reputation.

At the end of the day, silos exist because senior leadership allows them. The silo mindset starts with a splitting off from the collective agenda and senior managers allowing it. Power struggles to prove who is right and who is to blame ensue. Sabotaging, devaluing, blaming and throwing others under the bus when things go wrong soon become the norm as does withholding information from others. This attitude begins with leaders and is passed down to employees.

Causes of the Dysfunction of Silos

Silos are a direct result of a failure to establish and communicate expectations for leadership behaviors, team behaviours, and team norms, along with the failure of senior leadership to manage leaders and managers to these expectations. Without performance management systems including 360 feedback and leadership training and systems for communication to ensure interdepartmental discourse, the following symptoms and issues will arise.

Lack of loyalty to the organization

Silos form when leaders expect employees to be loyal to them and disregard the organizational mandates and systems in favour of their own. These same leaders can present individual goals as taking priority over those of the organization. An example of this is when someone in production decides to compromise quality to meet their deadlines so they look good. Employees are expected to demonstrate loyalty to their boss and compromise their own integrity to demonstrate loyalty to their leader.

Lack of alignment with organizational goals

Leaders with a silo mindset can do great damage to an organization by forcing the execution of their strategies based on their own agenda without consideration of what is going on in the bigger picture. They don’t seek to create a shared vision or build with their peers. As a result, they march to the beat of their own drum even when it is out of step with the rest of the organization. What adds to the power of a siloed leader’s agenda is the lack of accountability from senior leaders. They might have stated goals, values, and expected behaviours, but believe that everyone should align and they shouldn’t need to say or do anything to ensure compliance. Permissive leadership in general allows leaders and managers that have a siloed mindset to take power away from the collective, leading to a fracturing of the whole.

Because of a lack of cross-departmental communication, issues arise between employees in different departments. An employee might take the initiative to create a process to make workflow more efficient, only to find out that another department has been using a similar process for the last six months. These and other organizational inefficiencies that silos create also complicate product or service delivery and negatively impact the bottom line and reputation. The silo mindset damages interpersonal relationships and empowerment because employees feel helpless to do anything about the lack of collaboration in the siloed department. The result is an increase in complaining and emotional reactivity.

“You are either with us or against us” is the mindset of the leader and employees who work in silos use. The individualistic approach creates isolation as well as turf wars. Those from other departments are seen as competitors and potential obstacles to winning. Defensiveness or dismissal of others when asked about timelines or why something is being done differently than in the rest of the organization often occurs, further isolating employees from the collective. Once employees shift into survival, believing they are in competition with their peers, the seeds of distrust are sewn and defensiveness and conflict increase.

Humans have a powerful instinctual need to belong, affiliate with, and be accepted by members of a group. In employees, this need becomes frustrated when organizational silos exist, stemming from the resulting conflict, power struggles, and challenges to one’s own integrity. If they can only gain acceptance in a group when they are compromising themselves and acting disloyal to the organization, they soon disengage and become less productive. While they may do well for a while, striving to conform to the norms of the group, it creates mental distress in the long run.

As the issue arises from the top, the solution resides there as well. Leaders construct systems, processes, and procedures to ensure alignment to organizational goals, and without taking responsibility for leading their people and ensuring compliance, silos will exist. Leaders must stop blaming middle managers and employees for being entitled and not aligning with expectations. Their performance must be managed, and “lone wolf” leadership behaviors disallowed.

Silos are self-protective and restrict communication, cooperation and collaboration. Siloed mindsets construct barriers between leaders, departments and teams causing employees to compete with each other instead of working together.

It starts at the top:

Most of our client organizations and their senior leadership teams try to operate without any rules of engagement. Leadership teams must first create a leadership team charter to create their rules, behaviours, and roles to then build alignment and reduce competitiveness on their own team. Agreements on how employees are expected to behave and perform are necessary for successful sharing of accountability for the leadership team.

Establish and live your vision, purpose, and values

It is not enough to have a vision and goals. Leaders need to connect employees to the goals by helping them see how their role contributes. Embedding goals in performance management, employee engagement, and communication systems with clearly defined expectations gives employees a runway to be successful in their role and feel proud of their contribution. Senior leaders in particular need to demonstrate their own alignment to their stated vision through behaviours aligned with stated values and purpose.

It’s not enough to tell employees what’s going on. They need to feel they are a part of the larger whole by creating and communicating information about the organization across departments to encourage collaborative sharing of information. Any new initiatives suggested by one functional area should be decided based on how they affect the whole.

Stop blaming others for siloed mindsets or behaviour. If the senior leadership team is tolerating silos and misaligned behaviours, it means they aren’t taking their authority and responsibility as leaders seriously. Leaders need to self-assess and consider how their emotional intelligence and permissiveness are contributing to next-level leaders disrespecting and ignoring their role authority. They should also participate in leadership development or coaching to strengthen their competencies.